Sunday morning: time to rest or ticket to success? 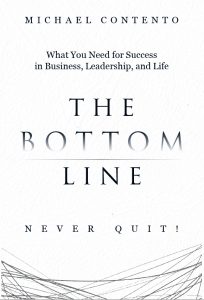 I had the epiphany when I was 18 years old and working at Jumbo Video.

Remember Jumbo? You do if you’re a certain age. This was the ‘90s. Before Netflix and Disney+ or Amazon Prime. You couldn’t just download movies and TV shows to your nearest screen. If you wanted to watch a movie at home, you had to get on your coat and ride your bike or your car to a store, like Jumbo Video, and wander the aisles looking for the movie you wanted to see.

Few of my coworkers faced this problem. They didn’t take their jobs seriously. But the epiphany that I had while standing behind the counter one day at Jumbo was that I did not have that luxury. As a rule, my coworkers had better marks at school, and their parents were going to pay for them to go to university. Jumbo was a way for them to get a little pocket money, and keep busy until they headed off for their next thing, to eventually become doctors or lawyers or engineers.

My epiphany was this: I did not have a next thing.

My marks weren’t good enough for me to go to university. Nor did I have the money easily available. My dad’s butcher shop, Tony’s Wholesale Meats, generated enough revenue to put a roof over our heads, and then some, but my parents were paying for the lives of six children. We didn’t get a weekly allowance. Had I asked for an allowance my dad would have done three things: He would have cuffed me upside the head. He would have asked me if I was nuts. Then he would have put me to work in his shop.

Think Jumbo Video isn’t your dream job? Try an entry-level position in a butcher shop, run by your dad, where your two older brothers also work. As the youngest Contento there I got all the worst assignments. Processing the poultry, for example, which is a euphemistic phrase that actually means you spend your entire shift ripping the intestines from hundreds of chickens. Thank god the cows came to us pre-gutted. Rabbits, goats, sheep—we also “processed” those ourselves at times. By shift’s end, our white smocks were covered in blood and various other smears that I preferred not to examine too closely.

Next to working at my dad’s butcher shop, let me tell you, Jumbo Video was a breeze.

Therefore, unlike my coworkers, who were basically killing time, I realized I needed to distinguish myself at Jumbo Video. So how did I do it? With my attitude.

If you worked at Jumbo Video, the Sunday morning shift was the worst. We opened at noon, because who was going to rent a movie on a Sunday morning? What many people liked to do, however, was return their movies on Sunday morning. The employees who worked the Sunday shift couldn’t just insert a VHS tape and watch Home Alone for the fifty-first time. Instead, you had to process several dozen returned movies. That meant making sure they were rewound, or rewinding them, and then returning the tape to the proper shelf. You had to remember that Top Gun was in a special section for Tom Cruise movies, not in the action aisle with Rambo 2. You had to pay attention and avoid returning Gremlins 2 into the sleeve for Gremlins, the original and vastly better movie.

I volunteered to work the Sunday shift. And when I did, I made sure to clear the returned videocassettes as soon as possible. So I could move on to cleaning up the tape racks. There was a time, at 2 p.m. or so on a Sunday afternoon, that I would wander the store, keeping an eye out for tape containers that were set backward on the aisle, or sections of the racks that weren’t in alphabetical order. And I wouldn’t find anything. The racks were orderly. The returns were processed.

The store was perfect.

It was only then that I would take a breath.

Soon, the manager of the Jumbo Video noticed how easy I was making her Sundays. She made me her assistant manager. Then she joined Jumbo’s biggest competitor, Blockbuster, as a regional manager. She was going to be in charge of numerous different stores. And she wanted me to run one. At the age of 19, I had my own Blockbuster Video store to manage.

I’ve already mentioned my attitude. But it wasn’t just that. It was also the fact that I made things easy for my bosses. I never told them about a problem unless I had already thought through the solution. I showed up on time. I actually did the things I told them I was going to do—within the timeline that I told them that I would do it. In short, they didn’t have to worry about me. I was able to achieve all that because of a set of skills that distinguished me from my fellow employees. It would be years before I recognized how important these skills were. Each one was easy to grasp and develop. The bizarre thing is that many people never develop them. Which is why I wrote this book: The Bottom Line is my attempt to help others develop the simple foundational skills that made me the success that I am today. The Bottom Line: What You Need for  Success in Business, Leadership, and Life is now available on Amazon.ca.